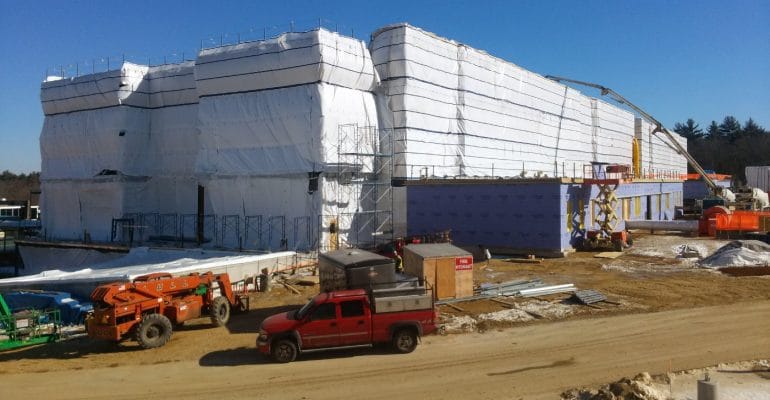 Wikipedia offers a simple definition of positive pressure: A pressure within a system that is greater than the environment that surrounds that system. Put another way, in a positive air pressure system, excess air will escape through openings in the system into the surrounding environment.

Positive air pressure is used in a number of applications. In hospitals, the system keeps airborne microorganisms away from patients. It’s also used to remove hot air from and deliver cold air to computers in data centers. In the construction world, positive pressure is a cost-effective way to distribute heat, provide a safe working environment, and remove moisture from enclosures. 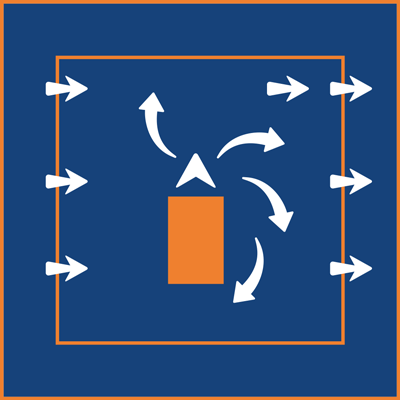 Heating Unit Placed Inside an Enclosure: Heat does not distribute through space. External wind pressure may produce nominal airflow. Air is recirculated, which raises safety concerns. 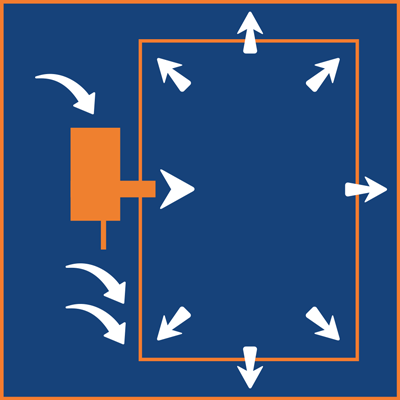 Heating Unit Placed Outside an Enclosure: Heat is distributed through space through positive pressurization. Strategically placed openings use airflow to distribute heat, remove moisture and ensure a safe air change.

Installing temporary heaters on a winter project is just a start. If considerations are not made for airflow, heating will be ineffective and expensive. To heat a given space, especially one with obstructions like walls, attention must be given to how hot air is distributed.

To address heat distribution issues, some companies are quick to recommend installing additional heating units. But, this increases equipment rental, setup and fuel costs. Sometimes multiple units are placed inside an enclosure to reach problem areas. Yet, recirculating air raises safety concerns related to carbon monoxide and introduces moisture issues. Alternatively, fans are sometimes used to try to distribute heat. But, our own experience on hot summer days will remind us that fans are used for cooling! So this extra expense actually has an opposite, unintended effect. Without proper airflow, these approaches are little more than expensive, over-sized space heaters. Positive pressurization leverages simple physics to ensure proper airflow and distribute heat—eliminating the need for extra equipment.

Babfar recommends placing heating units outside an enclosure. If units are placed inside, make sure the unit draws outside air, to maintain positive pressure. This will distribute heat effectively. Air will take the path of least resistance. So, well-planned openings in the enclosure (cracked windows or cut-outs in a building tarp) will draw air to an area needing heat.

OSHA’s recommended Permissible Exposure Limit (PEL) for carbon monoxide (CO) is 35 parts per million (ppm) as is the regulatory limit in the State of Massachusetts. A level of 200 ppm for several hours or more is considered dangerous.

Positive pressurization prevents carbon monoxide and other hazardous materials from reaching unsafe levels. An air change for a temporary enclosure should occur every one to two hours.

As mentioned in our air movers post, a steady flow of fresh air is the best defense against humidity and moisture. Positive pressure is the key to maintaining airflow and preventing moisture buildup from causing project delays and damaging materials.

The last thing you should do is throw more heat at heat-related problems. Instead, improve the airflow! A positive air pressure system forces air into an enclosure and out through strategically placed openings. Designed properly, this system will improve airflow, evenly distribute heat within an enclosure, and ensure a proper air change.

This information box about the author only appears if the author has biographical information. Otherwise there is not author box shown. Follow YOOtheme on Twitter or read the blog.
Twitter response: "Bad Authentication data."

Get a Quick Quote

Submit the following information and one of our representatives will contact you as soon as possible.